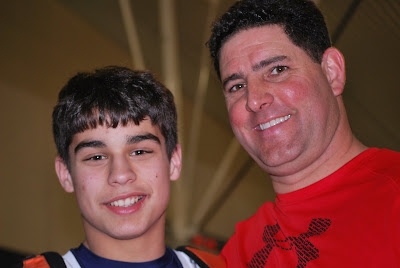 This is THE most wonderful teenage boy we know!

15 years ago, we fell in love with him... and we couldn't love him anymore if he was our own! 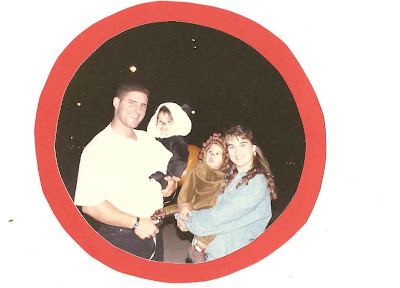 (wow, that was a long time ago... and even then, you can see it written all over his sweet little face, that Josh wanted Tony to hold him)
Tony would spend hours, just holding him and praying that he would become the man God created him to become. (He said he was praying, looks like he was just sleeping to me)

Tony has gotten to teach him lots of things, but mostly... Josh has helped us.
Last night was the "Father vs. Son" basketball game at the high school. 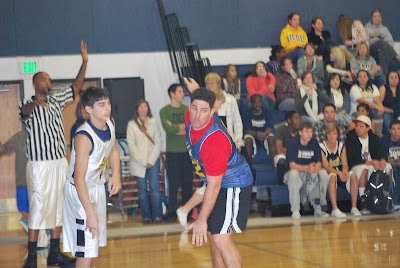 Josh asked Uncle Tony to play with him. 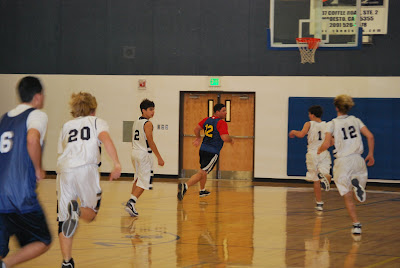 My nephew has NEVER, in 15 years years... seen or talked with his dad; even though we all live in the same town. Last night at the game; for just a moment, my heart went out for them both, not just my nephew. For Josh, it's hard to miss something you've never had. But for a quick moment last night, I felt sad for his dad too. He's missing out on knowing such a fine young man! I felt almost guilty that Tony gets to have these special moments with his nephew instead of his dad.
And while my hubby is NOT a basketball player (which is like saying the Grand Canyon is "just" nice), Tony went and played in the father-son game with Josh because he loves him more than anything. And while J probably wasn't too big on Tony's granny shot from the free throw line (seriously) in front of all his buddies...even though HE MADE IT... he was still happy they could play together. 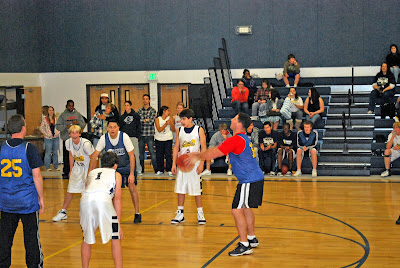 So, while T's not "really" his dad, he loves to act like he is because that is an honor. It is a privilege to be with Josh, and he will continue to shoot for being the man that Josh will count on when he needs him.
And sometimes you shoot and miss.

And sometimes you foul. 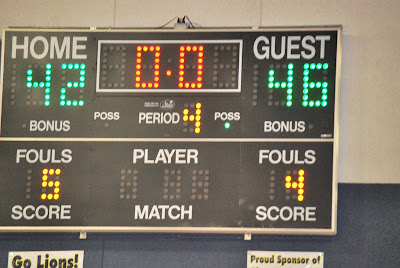 I'm hoping by the time our boys ask him to play in stuff like this, he realizes he's supposed to let them WIN!

Of course, since he can hardly walk today, I'm thinking that might actually happen.

He's a lucky boy to have such an uncle in his life :)

I wish your husband a speedy recovery!

That looked like a lot of fun! Special times that will not soon be forgotten. Thanks for stopping by my blog!

Really nice writing - love the part about sometimes you miss, sometimes you foul, and sometimes you score! Obviously you both have "scored" by being a strong support for the twins and their mom. Excellent job of putting into words what really matters! Angela VV

How great that Josh has a great Male Role Model to look up to...that is so important!

I like this post. It was very sweet. It just warmed my heart! Be proud of your hubby and your nephew! :)

Wow Tony more boys should have a man like you in there lives! Keep up the great work.

What a sweet post! I think it is so touching how close they are. What a special family you have!

Wow, that brought tears to my eyes. They are so lucky to have that special bond. It's a shame that Josh's dad is missing out.

And how fun your home must be with all those boys! I love it!

Thanks for stopping by my blog, I love meeting new bloggy friends.

Awesome story! Children are such a gift.

I am sure Josh's dad will have lots of regrets and guilt later in life. You and Tony are such warm, caring parents. Your boys are very lucky!

thanks for sharing that amazing inspiring part of your life!

I saw your blog title somewhere (?) and being the mom of 4 boys myself, I couldn't resist clicking on it. Just wanted to say hi. :)

WOW that is truely wonderful

Great post! Got me all ver-klemped. What a great this for J to have family like you guys. =0)

This is a really great post--your husband is a really fantastic guy. You and the boys (and your nephew!) are lucky ducks :)

God directs our lives and the lives of others for His perfect plan!
Awesome post.

What a great post!! That's funny that hubby was sore afterwards - my husband ALWAYS overdoes it when he plays softball after not playing in a while! lol

What a blessing that you all have each other. Doesn't make totally make up for not having a dad around, but Josh is lucky he has his uncle.

Your family and your nephew are lucky to have each other.

What a sweet post! J is a lucky boy to have such a wonderful uncle and great family! I hope the fun T had out weighs the pain he is in.

LOVE the granny shot picture! What a great guy you have there. :)

What a blessing you both are to him. It's sad his dad is missing out, but what a blessing it is that he has you all including the kids in his life.

You are all lucky to have such a special relationship. Thanks for sharing this great story.

Hello, I'm sorry it has taken so long to jump over but I have finally had some downtime to read through your blog and get to "know" your family.

Thanks for stopping by and if you don't mind, I will add you to my blogroll.

I am so glad he and your husband have each other. Wonderful.